Waterbeds Used To Be A $2 Billion Industry — What Happened?

Charlie Hall invented the waterbed in the late 60s, at San Francisco State University. After their heyday, waterbeds developed a stigma and sales declined. Hall’s new company, Hall Flotation, aims to bring them back — and it puts an emphasis on comfort.

Following is a transcript of the video:

Announcer: Wouldn’t you rather spend your evening in a waterbed? For a limited time, $189.99.

Narrator: Remember waterbeds? You might not, but they were all the rage in the ’70s and ’80s, and they kind of developed a reputation as a mattress that was good for, you know, stuff other than sleeping. But, believe it or not, waterbeds weren’t actually invented to make bedtime bouncier. They were intended to help people get better sleep.Waterbeds, as we know them, were invented in 1968, just after the “Summer of Love.”

Narrator: That’s Charlie Hall, the man who invented the waterbed. The waterbed was part of Charlie’s thesis project at San Francisco State University. His idea was to create furniture that could form to the contours of a person’s body without creating pressure points.

Hall: Famous furniture designers like Eames and Mies van der Rohe and people like that had signature chairs, but I think they were more a sculptural effort, often, than something that really analyzed comfort.

Narrator: The key concept of the waterbed is displacement. So as you move, water fills the gaps, and every curve of your body gets equal support. But research is non-conclusive as to whether or not waterbeds help alleviate aches and pains. In the same way that some people like firm mattresses and others like it soft, it ultimately comes down to personal preference.

Now, before settling on water, Charlie tried to make a chair filled with Jell-O and another with liquid corn starch.

Hall: It was corn starch that was used to thicken cherry pies.

Narrator: Needless to say, neither one of those really worked out, but Charlie came up with another design that was a hit. It was a large mattress filled with water, and it could be used as either a bed or a kind of gathering space that you could have in your living room. He called it the “Pleasure Pit.” So, so much for avoiding those sexual implications. I mean, come on.

Next, the design was patented in 1971. It featured a coil for warming the bed so the water wouldn’t get cold, and it was lined to prevent leaks. It was also intended to go inside a hard-sided bed frame to keep the bed from expanding too much laterally.In the late ’60s and early ’70s, San Francisco was the heart of the counterculture movement. So a lot of people thought the undulating mattress was pretty groovy. Hugh Hefner had one, according to a 1971 article from Time magazine, king-size, covered with Tasmanian opossum. Charlie sold waterbeds to some other notable figures, like one of the Smothers Brothers and Jefferson Airplane. He even sold a few to a nudist colony.

By the late ’80s, the waterbed industry had reached around $2 billion and accounted for about 12% to 15% of the market in the US. But not everyone was on board. From a practical standpoint, people worried about leaks and weight. Waterbeds, once they’re filled with water, can weigh over 2,000 pounds, which makes them nearly impossible to move without draining them. There were also rumors of waterbeds falling straight through the floor because of how heavy they were, but Charlie says that concern was overblown.

Hall: Any normal construction can support a waterbed.

Narrator: Others didn’t like the waves generated by moving around in bed. Any time you roll over in a waterbed, it sends waves through the mattress to the other side, which could wake up your sleeping partner or you when the waves come back your way. And even though Charlie Hall had patented his design, this didn’t stop other producers from making knockoffs, which were often much less sophisticated.

Hall: $29 bags of vinyl were being sold out of pickup trucks on college campuses and called waterbeds. And you could lay on them, it was this giant blob, not particularly safe and not particularly comfortable. A lot of bad designs, I think, were kind of the demise of the big volume in waterbeds.

Waterbeds Used To Be A $2 Billion Industry — What Happened? 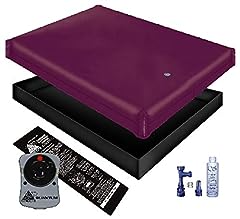 SANCTUARY FREE FLOW WATERBED MATTRESS STAND UP SAFETY LINER Blue Magic Fill and Drain Kit with Conditioner Quantum Solid State Heater (as of May 24, 2020 - More infoProduct prices and availability are accurate as of the date/time indicated and are subject to change. Any price and availability information displayed on [relevant Amazon Site(s), as applicable] at the time of purchase will apply to the purchase of this product.) 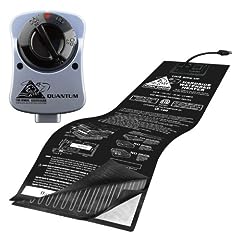 (558)
State-of-the-art Ultra sensitive electronic control that holds the temperature to 1/8 degree of set point ensures accurate temperature sensing Certified to the standards of the Underwriter's Laboratories (UL) #1445 for Waterbed Heaters Full Watt Soli... (as of May 24, 2020 - More infoProduct prices and availability are accurate as of the date/time indicated and are subject to change. Any price and availability information displayed on [relevant Amazon Site(s), as applicable] at the time of purchase will apply to the purchase of this product.)

(as of May 24, 2020 - More infoProduct prices and availability are accurate as of the date/time indicated and are subject to change. Any price and availability information displayed on [relevant Amazon Site(s), as applicable] at the time of purchase will apply to the purchase of this product.) 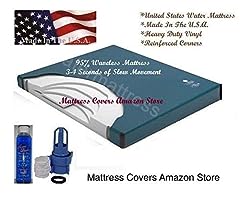 (64)
California King Waveless waterbed mattress only has about 3-4 seconds of slow movement Contour Mid Body Support which will let you sink into the mattress more level. Heavy duty vinyl with reinforced corners for years of service Life Time prorated war... (as of May 24, 2020 - More infoProduct prices and availability are accurate as of the date/time indicated and are subject to change. Any price and availability information displayed on [relevant Amazon Site(s), as applicable] at the time of purchase will apply to the purchase of this product.)

It dried up of

Damn PewdiePie is that you 2:39

What if I accidentally pop it?

I always wanted one

Waterbeds, beanbags and egg chairs were the best furnitures

Wonder if insurance companies will start asking if you own a waterbed, again?

Waterbed is bad idea, did you know why they used to a 2 billion industry? Because american absolutly buy everything and anything

My sister and I use to play pirate ship on our parents waterbed and we got in trouble when we broke it. Bye-Bye waterbed.

Horror movies helped with the downfall of water beds

Waterbeds huh I don’t like them they never felt comfy to sleep in.

i actually need that because i cant sleep well ;-;

My small ship doesn’t generate big waves. When we should set sail she complains headache. Well atleast it can’t be sea sickness.

my mom used to have a waterbed and my little brother was id say 3 at the time and hid a knife under the mattress and it popped and flooded our house!!

If you’re gonna smoke, smoke in a water bed…

I’m not the only one who wants this…. Right?

Does anyone have Charlies home address and phone #?

Ha! Had a relative that had a waterbed back in late 80’s! It was fun as a kid playing around on them!

The motion of the ocean.

Am I the only one who likes to practically sleep on a piece of plywood with springs? This shit would kill my back.

I loved my waterbed!

I had one and I HATED it. Any sort of movement will have the bed moving in waves, in every direction lol I got nauseous. no thanks!

Waterbeds were either too cold, or too hot. If you’ve never had one, you’re not missing out on anything.

I want a water bed